A sad day for the Pet Pantry

The other night, a friend of many of ours’ passed away: The Pet Pantry’s Cinnamon Bear Martin, aka Pebwin Cinnamon Bear. Cinny had been fighting cancer for a long time and her vet said she might not last much longer back in 2013. She proved them wrong. She was the proverbial Energizer Bunny. She kept going and going and going. She was the best dog ever and loved life. Her time spent at the store, as the official greeter was a joy for her as well as the many customers who came into the store. She was a fixture there. Many people would come in to say hi to Cinny then walk out without buying anything. That was her magic. She loved life. Otherwise she never would have fought so hard to stay. Finally, her body just called it a day.
We are all sad for Tammi and her two other goldens, who have no idea where their sister went. Time will heal broken hearts but it won’t be easy. Cinny was one of a kind. We will miss her. Run free sweet girl! 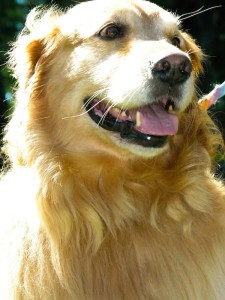